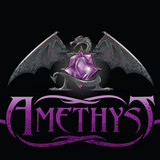 The band’s name reflects the music they create. The amethyst stone is a precious gem and one of the most appreciated varieties of quartz, and as the diamond, it is one of the hardest minerals ever. It has been used in jewelry since ancient times by Egyptian royalties, in magic rites from the middle ages and in modern times as a healing stone. Therefore, Amethyst’s music reflects this characteristics in every song, mysticism and beauty, combined with a hard and heavy musical art. The band’s headquarters are located in San Jose, Costa Rica, where they have their own studios where they work on compositions and new music. The band’s genre is hard to define by its members as it varies according to the influences of each one, creating a very unique sound which goes from raw heavy metal, symphonic metal, and also brings hints of progressive and even world music, producing the Amethyst sound