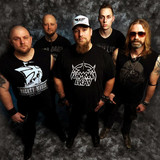 The Band is known for its energetic performance on stage, and they have a lot of live shows and festivals on their resume. Some of the jobs they have played, includes support for fellow danes PRETTY MAIDS, the legendary kings TESLA (US), and they have taken part in a European tour, with Metallica’s great source of inspiration and NWOBHM pioneers, DIAMOND HEAD (UK). STATEMENT delivers a powerful and energetic show every time, and there is no doubt, they love what they do when they are Rocking the stage! FORCE OF LIFE is the title of the bands third album, and the scene it set for what the boys would call a “kick ass” Hard rock album release! This time with Soren Andersen from Medley Studios behind the mixer. It gives the band a new and exciting edge, which can be compared to great bands like Scorpions, Metallica and Accept, but also salutes newer modern rock acts like Five Finger Death Punch and Halestorm.