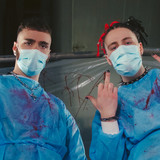 Riot Shift, a.k.a. Ole Baehr and Connor Kratz are delivering new vibes to the Hard Dance scene non-stop. The melding of Hardstyle, Trap metal and Heavy metal defines their style and mesmerizes any crowd that witnesses a performance by this German duo. Riot Shift do not only produce their tracks but also write, record and perform their own vocals ranging from rap to metal; which makes their DJ sets a unique show experience. The seamless fusion of dark, aggressive and catchy sounds has attracted a dedicated fanbase that keeps growing constantly. Since their first release in 2017 they have released hit after hit such as LASER BEAMS, MACHINERY, MUTATION and many more to come. The dynamic duo has gained international attention by remixing rap idols like City Morgue and collaborating with artists outside the Harder Styles spectrum. Riot Shift are notorious for their captivating on-stage energy, diverse sets and boundary-breaking productions. They are currently taking over the Hard Dance scene with their music and performances at the biggest indoor events and festivals worldwide. ☠️💉