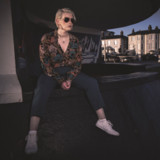 Bray native Ódú has always been a self proclaimed singer and songwriter of pop music. She released her debut EP 'Conversations' back in February 2017 which scaled the heights of the iTunes charts upon release. Produced by Elliott Marchent and co produced by James Darkin (Gavin James, Bitch Falcon, The Murder Capital) and Mick Heffernan (Columbia Mills, AE Mak, Chasing Abbey) the five track EP garnered rave reviews for its mix of electro pop, tropical pop and retro flourishes. Singles 'Different' and 'Feed You Lies' received acclaim from publications both at home and abroad such as Hot Press, The Irish Times, Riff, Paste Magazine as well as the cream of Irish bloggers such as Nialler9 and The Last Mixed Tape. Both Hot Press and The Last Mixed Tape also named her as a rising star to watch. In late 2018, the County Wicklow tunesmith returned with the uplifting and vibrant single 'Roots', which was playlisted on RTE Radio 1 and added to Spotify's New Pop Revolution playlist. The release also coincided with her debut showcase as part of Hard Working Class Heroes festival where she shared the bill with artists such as Pillow Queens, Roe, Wild Youth and many more. Now Ódú is back with her most recent single The Feeling, a love song with a twist set against a backdrop of glistening, languid synths and with a cinematic accompanying video. The track received universal praise and was chosen as 2FM's Record Of The Week.