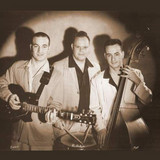 Mischief! Is one of the most refreshing bands on the Rockin’ Scene today. Their high-energy live shows are fantastic, and it’s hard to believe that three musicians can produce such a full sound and perform such a varied set. These guys are not afraid to enjoy themselves. When you see them live, you know from the moment they hit the stage, and you see Daze swinging his guitar, that you’re in for a good time! Add Richard’s broad smile and Pat’s obvious enthusiasm and you just know, instinctively, that you’re in for a treat! They’ll jump around, share jokes with the audience and display an infectious sense of fun. Nobody leaves their shows without feeling breathless. Mischief! capture the true spirit of rock’n’roll. They’re not slaves to vintage, trying to recreate a period-perfect sound which would hold back their creativity. They play new and exciting music with a big dash of 50s energy.

A large proportion of the songs are written by the band, producing modern classics that will undoubtedly stand the test of time. Listen carefully, and you’ll hear shades of Charlie Feathers, Eddie Cochran and maybe even a little bit of The Everley Brothers on speed! Dancers will enjoy this band and DJs will love to spin their records.