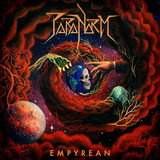 Paranorm is a progressive thrash/death metal band based in Uppsala, Sweden. Starting out as a traditional thrash metal band, they soon began experimenting with other metal styles, before settling on a unique blend of thrash, death and progressive metal with a heavy focus on arrangement and melody. The origin of Paranorm dates back to 2007, when Markus Hiltunen (guitar), Fredrik Kjellgren (guitar) and Marcus Blom (bass) met in high school. Drummer Karl Askebro officially joined the band in 2008, and main lyricist Hiltunen took on vocal duties to complete the lineup. During the following two years, the band recorded a demo, played numerous shows around their home area, and refined their sound to a progressive form of thrash metal. In 2011, Paranorm went into the studio with producer Nino Vukovic and released their first EP Pandemonium’s Rise. After promoting it on stage around Sweden, they started work on the next EP, The Edge of Existence. It was also produced by Vukovic and released in 2014. Askebro left the band in 2018, and Paranorm recruited powerhouse drummer Samuel Karlstrand shortly thereafter. Meanwhile, work was ongoing for their most ambitious project to date: their full-length debut album. This time Paranorm sought out the talents of producer Lars Hultman and the album was recorded in 2019-2020. The band signed with Redefining Darkness Records in 2020 and Empyrean is set for an early 2021 release.