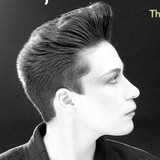 Giuni Russo, was born in Sicily on September 10th 1951. This special performer, famous for her amazing vocal range (almost five octaves), combined an unquestionable technique with an original approach to music. Giuni was a unique artist, unusual to the Italian music scene and beyond. She is considered to have one of the most beautiful voices of all time. As a child, Giuni began to study composition and singing, constantly refining her outstanding talent. In 1975, Giuni recorded her first album, "Love is a Woman", entirely in English. Giuni during her long career continued to follow an increasingly eclectic path. She teamed up with poets and writers, and studied old sacred texts. During the night, between 13th and 14th of September 2004, Giuni Russo died at her home in Milan. The association, Giuni Russo Arte (created in 2005 by M.Antonietta Sisini), protects and promotes Giuni's creative heritage. It is carrying on her work, with great respect for Giuni's artistic choices.