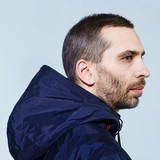 Specializing in warm electronic music, Poirier is a prolific, creative and eclectic Canadian producer/musician/DJ. Constant in his music is a desire to build bridges between different languages, communities, and cultures. His open, uninhibited musical mind means that his works bend boundaries, resulting in compositions that mix several styles and eras. Based in Montreal, he tours constantly, having delivered his brand of music and openness to people in over 30 countries worldwide and he has performed in major festivals, such as BoomTown, Dour Festival, Montreux Jazz Festival, Garorock, Sonar Festival, Nyege Nyege and many more. Active in Montreal, his successful monthly party Qualité de Luxe is dedicated to African and Caribbean music, attracting capacity crowds for over five years. He produced a total of 10 albums and many EPs with labels such as Wonderwheel Recordings and Ninja Tune. Winner of the ADISQ award of the Producer of the Year with producer/singer Boogát in 2013, Poirier also released 2016’s "Migration", an album full of reggae, electronic music, dancehall and dub. In 2017, he followed up with “Be Alright”, an EP inspired by Afro house music and featuring the Mozambican-Canadian singer Samito on the anthem "Sowia". In 2020, Poirier released his 11th album "Soft Power" inspired by his travels abroad and his beloved and multicultural city of Montreal. The album features tracks in many languages all united by Poirier's elegant and subtle production.