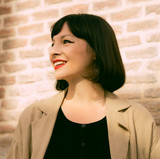 Alondra Bentley was born in Lancaster in 1983 in a street called Ashfield Avenue, that was the title of her first album, published in 2009. After it’s release an intense tour took place with over a hundred concerts in Spain, UK and Mexico. In summer 2012 she published an album with songs for children under the title Alondra Bentley Sings For Children, It’s Holidays!; in autumn her third album The Garden Room was released and shortly after that in November four new songs appeared in the OST for the film Loving Eimish. Her fourth album was recorded January 2015 in Spacebomb Studios (Richmond, VA) with producer Matthew E White and released in fall 2015. Available on Mont Ventoux   In 2018 Alondra recorded her fifth album “Solar System” produced by Carasueño