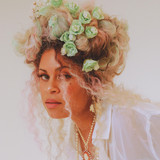 The desire for change stirs from the inside. We either listen to it—or not. ​Aluna​ chose to listen. After generating over one billion streams, selling out shows around the world, and receiving award nominations and widespread critical acclaim as one-half of multi-platinum duo AlunaGeorge, the singer, songwriter, and producer established an unpredictable and undeniable signature sound on her 2020 solo debut. The music represents the culmination of her journey from ​“a black girl in an all-white British suburb back in the day”​ to launching a rule-breaking revolution where rigid boundaries dissolve between culture, race, gender, and genre. “The recent ​‘Black Renaissance’ ​is so inspiring to me,” she explains. “There has been a pivot in all creative endeavors from film and television to plays and comics. Black people have begun involving themselves in non-stereotypical things regardless of who agrees. The outcasts have found each other. This project sums up a defiant, rule-breaking, and transitional election of new culture. To me, this album represents that within its own small, individual world. I’ve gone through the process of owning myself, and this is the celebration.” “I feel like this is a time of rebirth for everyone,” ​Aluna​ says. “That can be both scary and really exciting depending on which way you conduct your mind or your emotions. For me, music has always been able to shift me towards the future, positivity, and high energy in order to do more."