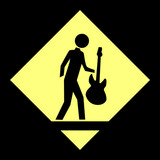 Singer/songwriter John Renaud moved from his home state of Vermont to Southern California in 2003, playing open mic nights and solo acoustic gigs with the ultimate goal of starting a band.

Bridgework began taking shape in 2005 when John paired up with drummer Scott Witzenburg, and a full band lineup was complete in 2006 with Erik Kutzler on bass, and Jack Sparks on guitar. Bridgework performed numerous shows throughout the Los Angeles area, and released the self recorded/produced EP "World Disappears" in February 2008.