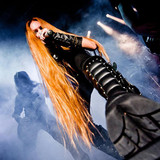 Decadence Sweden - Extreme female vocals, distinct sound, dynamic live performances and full DIY management. Decadence presents intensive and aggressive music that both old schoolers and new wavers will enjoy. 100% underground since the start of this century and counting. The musicians behind Decadence are ‘Metallic’ Kitty Saric and Kenneth Lantz. She is behind the Decadence Underground Network. He is behind The Sound. Decadence has promoted the Underground music scene, pushed for the DIY, licensed the top selling release to three different labels simultaneously while running it through the own label Heavy Dose, pushed for other bands to do the same, and had all promotion done by fans for fans through street teams, fan clubs and Metalheads from all over the world. For fans who enjoy Death, Testament, Kreator and Metallica.