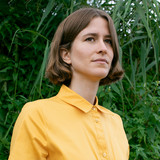 Martina Lussi is a Swiss artist and musician. Her work, in which she frequently uses sound, has been shown in museums and exhibition spaces around the world. Her music has been released on Latency, Hallow Ground, and Otium, among otherplaces. Following Lussi’s debut Komposition O08 and the split 10-inch ASIHNT / FOF19, Balance is her third release on the Swiss label Präsens Editionen. PRESSTEXT BALANCE: The new album of Swiss artist Martina Lussi joins what no longer is conjoined. Conceived and realized over a period marked by major changes in both the private sphere and the world at large, Balance brings together the before and after. The album is held together by a common feature: Lussi’s voice, with which every composition began. Her singing, modified by effects, is supplemented by other sounds, which are light at times, bittersweet at others, and sometimes replace her voice altogether, like on the album’s fulcrum “Fragments of Attention.” On the first half of Balance, Lussi’s singing plunges “Meditation on the Multitab” into a cosmic soundscape; occasionally a rhythm irrupts into it. On “Time Laps,” a track from the second half, the artist’s singsong articulates rhythmical elements and propels them towards a reluctant euphoria. As an album, Balance appears open and fragile, at times even vulnerable, but Lussi’s relentless openness derives from the immense strength needed to weather changes both small and large.