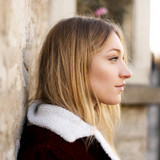 Dolly Mavies is an Indie/Folk Alternative singer-songwriter from Oxford. Starting out as one woman and her guitar, she is now joined by a full band consisting of brothers Adrian and Chris, Drummer Belinda and Ruth on Backing Vocals. Dolly Mavies is a the perfect blend of folk/rock and alternative/indie. With atmospheric sounds, haunting vocals, and catchy hooks, Mavies has been likened to artists such as Fleetwood Mac, Daughter and Florence and the Machine. After releasing EP Reflections in 2019 Mavies went on to receive national airplay by BBC 6 Music, feature on BBC Radio Wales and was championed by BBC Introducing in Oxford going on to play at BBC Introducing Live in the Autumn. In 2021 Dolly Mavies released her new single Wait For Me (Live in session at Grand Chapel Studios) played Car Fest North, The Big Feastival, and has supported Beverley Knight, Gabrielle, Reef and Chris Leslie of Fairport Convention.