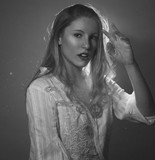 She has been singing for as long as she could speak. Raised in a musical house in Colorado, Ruby spent her formative years singing at the piano, eventually honing several instruments and learning to perform in local bands and vocal groups. After moving to NYC to spend her college years studying Jazz at Greenwich Village's The New School, she eventually found home in songwriting. She began spending her days off the bandstand and on a writing kick, emerging with a uniquely gentle blend of folk, acoustic pop. She began to perform her original music and developed a sound that took root from her foundation of jazz and the 60s songwriters she was exposed to as a child. Always, her debut single, was released in 2019. She has three singles set for release in 2021. Outside of the studio, Ruby also maintains a dynamic touring schedule. Following a self-produced tour in 2018 through Colorado that culminated in a benefit concert for public land protection that generated state-wide buzz, Ruby continued gaining speed with several tours across the U.S. She has performed at venues in Denver, Portland, Houston, and Boston. She also performs regularly through the New York circuit. In 2019 she was invited to tour with R&B/electronic duo Tropic and closed the year opening for their five-show run in the Philippines.