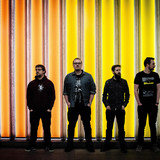 Only Echoes Remain are one of the UK’s most exciting and fast-growing new instrumental rock groups, having already caused a stir in the live scene after playing energy-packed sets at festivals and shows around the UK. Their music is emotional, cinematic and on an epic scale. Their debut album, The Exigent, is a concept album best enjoyed in one single listening session.

“The Exigent has far grander vision than most debut releases, and it is an even rarer thing when such a record manages to deliver on its promise. Frequently lauded as “one’s to watch”, Only Echoes Remain are set to release a much-anticipated first album that immediately sets itself apart from its peers, and delivers a powerful, emotional and deeply engaging listen from start to finish.” – Original Rock