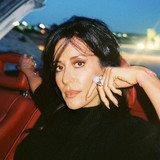 Ana Moura is the owner of a singular voice, a magnetic presence on stage, where her image and her powerful voice compete to generate rapture, admired by Prince, Gilberto Gil, the Rolling Stones, Caetano Veloso and more. With an unmatched musical intelligence and versatility, Ana has what it's needed to sound as imposing in fado as in rock, in soul as in swings with more Africa inside. The artist is defined by her courage to try to follow new paths, always in search of innovation.