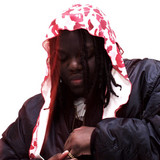 KALEB MITCHELL began his career by releasing two mixtapes and multiple singles for free online between 2015 & 2016. Kaleb quickly began gaining traction on platforms like SoundCloud and YouTube. He has independently accumulated more than 11 million streams on Spotify, and 3.5 million plus streams through SoundCloud alone. Mitchell’s third mixtape and first commercial effort, So Help Me God, was independently released on June 9th, 2017 while he was still in high school. The project peaked at #7 on the iTunes Hip Hop/Rap charts, and came in at #82 overall. Kaleb's second retail project, MITCHELL, dropped on July 13th, 2018. The project entered the iTunes Hip Hop/Rap charts at #15, and accumulated well over 200,000 streams across all platforms in its first week. In August of 2019, Kaleb inked a deal with Def Jam to re-release his fan favorite, "Get It". The track was picked up by the New York Jets as their season anthem, and was also remixed by NY rapper Casanova. After a two year hiatus, on February 5th, 2021, So Help Me God II, was finally released. The album peaked at #7 on the iTunes Hip Hop/Rap charts, and also came with a short film entitled 'So Help Me God', written and directed by Mitchell himself. The album features the likes of John Givez, Xavier Omär, and more, and has been met with rave reviews from fans and critics alike. In terms of what the future holds, in an interview with Rolling Loud radio, Mitchell promises, "there won't be any more hiatuses".