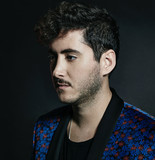 Space, depth and texture are three words that truly capture Amirali's sonic signature and characterise the intricate musical world in which he operates. Emerging onto the scene in 2012 it was this distinctive sonic style that gained his ‘In Time’ LP such enormous critical acclaim. Shortlisted for album of the year by Clash Magazine and hailed as “an example of perfect craftsmanship” by Resident Advisor, this young producer had created a ripple in the ocean which would transform into a tidal wave.  To truly understand Amirali’s creative approach you have to discover the different aspects that form his process. He is a live instrumentalist, singer-songwriter and at the core of that a classically trained pianist, this is his musical understanding and the platform on which he can begin to build. He is also an architect by education and his sound has been characterised as rich and full of layers, owing to his awareness of structure. Combining all of this he has a familiarity with all musical elements and how they balance one another to create a full and fascinating composition.  Amirali has gained widespread support from the top tier of electronic musicians, key media outlets and by continuing to turn heads he was invited to perform live on the very first video broadcast of the esteemed BBC Radio 1 Essential Mix. This resulted in a heavy touring schedule, allowing him to grace the stages at the most prestigious venues and festivals around the world.