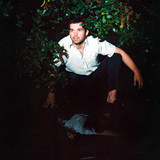 Founded in Falmouth in 2013, The Golden Dregs is the project of Benjamin Woods, songwriter and producer currently residing in South London. The Golden Dregs has manifested under many guises, through piano-man, bar-band, karaoke-crooner to its current iteration as an all-singing-all-dancing seven piece. “I think of The Golden Dregs as a project as opposed to a group or a person. It’s a platform for me to explore different outlets” says Woods.   Hope is for the Hopeless, the second album from The Golden Dregs, was self-recorded between Cornwall and London and features Woods alongside his sister Hannah (saxophone) and Michael Clark (backing vocals)   While earning favourable comparisons to the likes of Lou Reed, Tom Waits and Tindersticks, The Golden Dregs is creating a world of its own that continues to draw people in.   "The beauty of Hope Is For The Hopeless is distilled through its whisky jar half-empty lens, a panoply of frayed flickering sonic snapshots which repeatedly reward; inviting and enticing into a heady urban safari that the listener can just sink and fade into." The Line of Best Fit 9/10   'Like witty sardonic gunslinger's ghost pouring wise-guy lyrics from the bottom of a mile-deep well. Woods drawls his woes in a baritone mixing Lee Hazlewood and The Magnetic Field's Stephin Merritt. The title track glimmers with optimism, but all the tracks will stay on your mind" Mojo ****   Photos by Josha Eiffel. Styling by Rhianedd Dancy