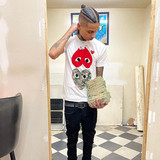 Born and raised in Gray Court, a small town in northwestern South Carolina (est. population 1,021), Lil Mexico started rapping at the age of eleven, inspired by Lil Wayne's mixture of punchlines, charisma, and mass appeal. In 2017, Mexico started to gain traction with "Forever," a low-budget, high-energy video that offered a glimpse of his country trap lifestyle. With his Trench Baby mixtape series, Mexico grew his core fanbase and solidified his reputation in the Southern scene, recruiting the likes of Fredo Bang, NGeeYL, and Slimelife Shawty for 2019's Trench Baby 2.5. With Life Of An Outlaw, Lil Mexico heads into 2020 on a wave of momentum, as he looks to confirm his status as one of the south's most promising emcees.