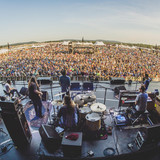 In the course of popular music history, the breakthrough albums for several legendary artists were live recordings, most famously At Fillmore East by The Allman Brothers Band, Frampton Comes Alive by Peter Frampton, and Alive by KISS. Now four decades later, history seems poised to repeat itself with the release of We’re All In This Together, the powerful, new live album by Hard Working Americans. Hard Working Americans is the rock sextet some journalists dubbed a “jam band supergroup” because of it’s high-profile lineup: bassist Dave Schools and drummer Duane Trucks of Widespread Panic, guitarist Neal Casal of Chris Robinson Brotherhood, keyboardist Chad Staehly of Great American Taxi, and celebrated singer-songwriter Todd Snider on lead vocals. Shortly after the release of their first album, HWA added Tulsa guitarist Jesse Aycock to the fold. “For the kind of band we are, I think this is a definitive statement for us,” Snider says of We’re All In This Together. “It captures a collective spirit, a collective muse being shared by a thousand-plus people.”