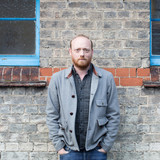 Paul Goodwin grew up in London but lives in Cambridge now. He spent the first decade of the 2000's dragging his guitar around the rail network and on the odd plane, playing his quietly heartbreaking songs anywhere that would have him, to anyone who would listen, and quite a few people that wouldn't. His music has taken him all over the UK as well as to Canada, France and America and he's played alongside acts ranging from Alessi's Ark to Waterson:Carthy to Wayne Hussey. His painstakingly produced first album, Scars came out in 2009 and the follow up mini-album Trinkets and Offcuts was released in summer 2011. His well received second full album The Northern Lights In The Neon Tube eventually followed in late 2016.