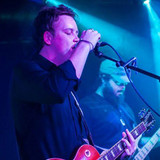 Glen Kirkham is a Songwriter and Producer hailing from Blackpool, UK. Following the release of his debut album in 2012, Glen's musical target changed from blues laden pop to creating a number of highly revered YouTube musical parody channels which generated over 4 Billion views across social media combined. Following a short break away from music, Glen returned in 2020 with a number of singles which harp back to his original pop/blues/rock Influences.