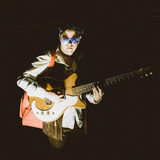 A singer/songwriter and multi-instrumentalist whose music is equally poignant and outlandish, sugary and abrasive, and as well-versed in the catchiest pop music from the '60s, '70s, and '80s as avant-garde and outsider music, Ariel Pink is an art school dropout who became one of the most influential indie musicians of the 2000s and 2010s. Recorded on an eight-track recorder that gave his music a murkily otherworldly quality, his initial albums as Ariel Pink's Haunted Graffiti spanned the post-punk and Krautrock hybrids of 1999's Underground, the hazy quarter-life crisis meditations of 2000's The Doldrums, and the relatively light-hearted but just as mercurial territory of 2002's Lover Boy and 2003's Worn Copy. When Animal Collective's Paw Tracks label reissued some of these early albums, Pink's acclaim and influence reached a peak, inspiring the chillwave movement as well as a lo-fi revival. However, few of his followers could approach his audacious strangeness, which remained in his later, widely released work for labels including 4AD and Mexican Summer. The slightly higher fidelity of albums such as 2010's Before Today -- the first album Pink recorded in a professional studio -- only made it easier to hear how singular his mutations of pop music were. After retiring the Haunted Graffiti project, Pink's solo albums, which included 2014's Kim Fowley collaboration pom pom and 2017's homage to the cult L.A. musician Dedicated to Bobby Jameson, continued to connect and recombine pop's history in his one-of-a-kind way. Ariel Pink was born Ariel Marcus Rosenberg in Los Angeles on June 24, 1978. As a young child, he was interested in visual art and music, and was writing his own songs by age 10. Along with pop acts such as Hall & Oates, Michael Jackson, 10cc, Fleetwood Mac, and David Bowie, Pink was also interested in avant-garde music. During his time at Beverly Hills High School, he wrote pieces for bass guitar and kitchen utensils that he committed to tape with a portable recorder. By 1996, he was immersed in recording and issued a steady stream of cassette releases attributed to monikers including Ariel Pink's Haunted Graffiti and Ariel Rosenberg's Thrash and Burn. After attending U.C. Santa Cruz for a year, Pink transferred to the California Institute of the Arts as a fine art student. It was there that he met John Maus, a like-minded artist/musician who became Pink's close friend and roommate after seeing a gig by his band the Appleasians. Pink borrowed Maus' Tascam eight-track to record these songs, which were more melodic than his earlier material. His creative process was amateurish, yet inventive: he often mimicked drum sounds with his mouth, and his use of cassettes added a distinctively gritty yet atmospheric patina to his music. In 1999, he self-released the first Ariel Pink's Haunted Graffiti album, Underground, as a cassette that he shared with friends. During this time, Pink worked on his second album on his own eight-track recorder, a Yamaha MT8X-8 that gave an even tinnier, hazier sound to his songs about twenty-something ennui. He presented the album, The Doldrums, in 2000 as his senior thesis project before leaving CalArts without a degree.

Pink then moved to a local ashram and worked at a record store while continuing to record prolifically. In 2001, he released the double album Scared Famous/FF>>, which brought synths to the forefront of his music and featured collaborations with R. Stevie Moore, a pioneering lo-fi artist that Pink regarded as a mentor as well as a friend. The following year, he issued House Arrest and Lover Boy, an album that included contributions by Maus and another friend, Holy Shit's Matt Fishbeck. Like Scared Famous/FF>>, these albums were released as a set. Rhystop released Pink's next album, 2003's slightly more refined Worn Copy. In 2003, while attending an Animal Collective show, Pink passed a disc of his recordings on to the band via future Graffiti drummer Jimi Hey. Soon after, the band's label Paw Tracks reissued The Doldrums with the collection of bonus material Vital Pink in 2004 to critical acclaim that earned Pink a cult following. Over the next few years, his early albums were given wider releases. Along with the Paw Tracks editions of Worn Copy (2005) and House Arrest (2006), smaller-scale reissues of Lover Boy and Underground appeared. In addition, Human Ear Music issued Scared Famous, a 2007 collection of songs from Scared Famous/FF>>, while Pink offered the 2008 compilation Odditties Sodomies, Vol. 1 on vinyl and as a limited-edition tour release.