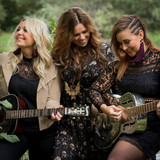 Meet “Miss Winter”, who combine their common Swedish music heritage with a vivid passion for country music and vocal harmonies. Their music is a sweet mix of pop and country with a tasty Scandinavian touch. Anna, Linda and Jenny has been working as professional musicians and singers separately for more than two decades, but five years ago they finally found each other and started creating their own brand of Modern Country music! The first song Miss Winter released was ”The Road”. A straightforward country song which quickly found its way to national public radio. 2018 was a busy year. Performance at CMM in Berlin, releasing 6 singles, performing at Buckle and Boots in Manchester and made a summer tour in Sweden.

2019, Miss Winter have had the honor to perform at more than fifteen Country music festivals and venues in Sweden. -“It felt lovely to take care of our fans at home in Sweden!”