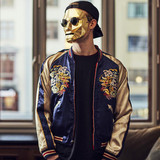 Formed in 2012 Satin Jackets is the brainchild of German producer Tim Bernhardt. Inspired by the clean productions of artists like Chic and studio genius Trevor Horn, Tim set to reintroduce that polish and sheen back into the modern disco scene. “It always sounded like the musical equivalent of a fashion magazine’s cover" Tim explains. The result was ‘You Make Me Feel Good’, a sublimely laidback slice of Balearic House that introduced Satin Jackets to the world. Released on storied Belgian label Eskimo Recordings, the single quickly established Tim as one to watch amongst the thriving nu-disco scene. Whilst the face behind Satin Jackets may have remained a mystery his warm sound was fast becoming very familiar to music lovers around the world. Firmly established as one of Eskimo’s flagship artists Tim would define the Satin Jackets’ sound with his debut album ‘Panorama Pacifico’ in 2016. The album won praise from the likes of Mixmag, DJ Mag and Groove, led to gigs around the world and to date has been streamed on Spotify more than 30 million times. From wanting to recreate the sound of magazine covers to appearing on them, the past few years has been quite some journey for the still enigmatic producer. Hidden away in the unlikely surroundings of one of Germany’s ancient forests, out of sight but fully in control, Tim is producing music that reflects the glamour and glitz of 70s Manhattan, artfully updated for the 21st century.