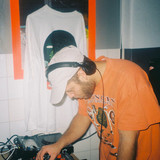 Jake Milliner is a beat maker from South London. His jazzy beats are full of mellow keys, heavy drums and dusty grooves. He has teamed up with Melting Pot Music to release his debut album "Bernie Says" (10.11.19).

Jake has laced beats for Kofi Stone, Barney Artist, Yazmin Lacey, Hawk House, Musiq Soulchild and T3 (Slum Village). Jake has also played a Boiler Room set and is a regular on NTS radio. With "Bernie Says" Jake himself steps into the spotlight for the first time. On 13 tracks Jake Milliner makes the transition from beatmaker to fully fledged artist. His boom-bap roots are still intact on “Bernie Says” but the sound spectrum relies on jazz and boogie too with lots of heavy keys – courtesy of Jake himself and Alfa Mist who is guesting on the first single “Reminisce" alongside trumpeter Marcus Tenney. On the vocal-side Jake is joined by former Hawkhouse singer/rapper Bubblerap and long-time friend 25. The album enjoyed radio-support from some key players on BBC 6 including Marry Anne Hobbs, Tom Ravencroft and Don Letts and has gained various plays on Worldwide FM and NTS. The album and singles artwork is based on works by London artist Stuart Ruel.