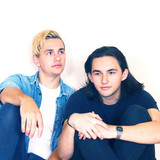 Ministry of Mars are an indie pop/synth-pop electronic music duo, consisting of brothers Alistair and Jon Marsden. The British-Australian brothers grew up in Brisbane, Queensland, where they both achieved solo music success before becoming Ministry of Mars forming in late 2018. Winning awards such as a Queensland Music Award, Perth’s ‘Into the Limelite’ Competition and Gympie’s ACIM ‘Voice of Urban’ the brothers now join forces to create pristine Pop anthems. The brothers first three singles they released in under a year, "Breaking Me", "Recognise" and "Day 'N' Night (feat. Jad Lagoon)" have combined accumulated over 100,000 streams on Spotify. They have received praise and support from many online and radio outlets across Australia, UK and America including; BBC Radio, Hype Machine, 4ZZZFM, Uckfield FM, Radio Adelaide, comeherefloyd, Happy Mag, Indie Star Radio, YACK! Magazine, to name a few. Having written and produced their second single, "Recognise", at the legendary Abbey Road Studios in London, Ministry of Mars are not shy to deliver and showcase their creativity within song writing and production ability at a world-class level. The brothers have recently returned from Los Angeles working on writing sessions at the world famous Capitol Records and Neon Sounds in preparation for next year. 2020 will see Ministry of Mars taking their debut live show on tour and to festivals across Australia as well as plans to work on their debut EP to be released later in the year.