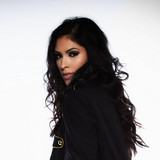 Natalia has been making some global noise for the past few years and now she is back with a monster track titled “Pacemaker” featuring Grammy nominated, multi-platinum Hip Hop legend Petey Pablo, his songs "Raise Up", "Freek-A-Leek", "Vibrate", "Show Me The Money" and his multi-platinum hit with Ciara "Goodies" are iconic and still get millions of mainstream plays today. "Pacemaker" is guaranteed to excite you, it's one of those songs that is undeniable, a pop EDM song that is just mesmerizing. This is definitely is gonna be on everyone's playlist.Natalia Damini single "Pacemaker" #28 on Billboard Mainstream TOP 40 Chart, #46 Mediabase Top 40 Published Chart (Natalia is the only Independent Artist in the Top 50), #34 on Mediabase Top 40 Activator Chart, debut #6 on Itunes Pop Chart, #1