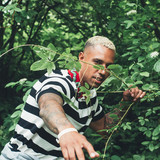 Born in the Netherlands, professional swim suit model and full time superstar Bizzey took the world by storm as a part of the legendary Yellow Claw. In 2017 he decided to pursue a solo career path in order to be able to spend more time with his family back home. This sparked a year filled with golden &amp; platinum releases and collaborations with Dutch rap heavyweights such as Frenna, Yung Felix, Josylvio, LouiVos and Mula B. Bizzey's characteristic sound contains elements of hip hop, R&amp;B, Baile Funk and club music of all types. Following up on ‘Traag’, which gained global traction, Bizzey reached his first Dutch number #1 single with ‘JA!’ in january 2018. On february 16th, his debut solo album ‘November’, named after his son, is born.