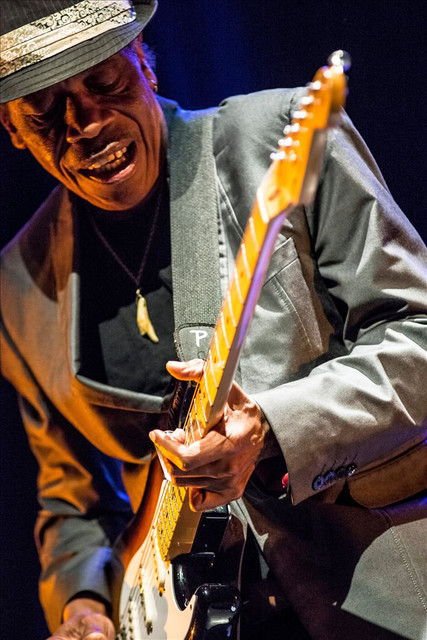 California-based blues guitarist, songwriter, and singer James Armstrong may be small in physical stature, but his guitar playing, original lyrical themes, and singing will leave the most hardened of blues fans convinced of his brilliance. It's fair to say that Armstrong has the music in his blood: he is the son of a jazz guitar-playing father and blues-singing mother. Raised in the Los Angeles area, he founded his first group in junior high school. He has cited Jimi Hendrix, Robert Cray, Albert Collins, Albert King, and Eric Clapton as inspirational in his development. Highlights from his years in the Los Angeles area -- before moving north to the San Francisco Bay Area -- include shows backing Collins, Big Joe Turner, and Los Angeles veteran Smokey Wilson. After releasing the critically acclaimed Sleeping with a Stranger in 1995 for the San Francisco-based Hightone label, Armstrong's promising touring career was interrupted by tragedy. One night in April 1997, a robber broke into his home and nearly stabbed Armstrong to death. After weeks in the hospital and months of rehabilitation, Armstrong picked himself up, dusted himself off, and started all over again. In the late '90s and into the new century, Armstrong hit the blues festival circuit with a passion, and put in a particularly impressive performance at the Pocono Blues Festival in Pennsylvania. In 1999, Hightone released Dark Night, with Joe Louis Walker and Doug MacLeod taking lead guitar turns on two tracks. By the spring of 2000, Armstrong again entered the studio to record Got It Goin' On, an album that showcased his delicate guitar stylings and soulful singing backed by Joe Louis Walker's rhythm section and a guest appearance on two tracks by keyboardist Jimmy Pugh of the Robert Cray Band. After his tragic stabbing, Armstrong found he couldn't run his fingers up and down the guitar neck as fast he once was able. He realized that faster isn't necessarily better, and recognized that good blues is more about feeling anyway, citing the slow, powerful, methodic stylings of one of his influences, Albert King. "2 Sides," a selection from Got It Goin' On, was included in the movie Speechless starring Michael Keaton, but plenty of other Armstrong originals demonstrate why he is to be taken seriously as a songwriter who continues to sail into heretofore uncharted lyrical waters. Although Armstrong took a decade-long hiatus from recording after Got It Goin' On, he reappeared in 2011 with Blues at the Border on Catfood Records. Three years later he put out Guitar Angels, which was followed in 2017 by Blues Been Good to Me. ~ Richard Skelly, Rovi