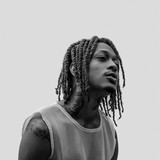 All Nue really wanted was a fresh start. The Toronto rapper and singer is a true creative, pushing boundaries, fitting square pegs in round holes. His music is vibey, edgy, with pop, electro and rock elements, and big on melody. He’s smashing up parameters, but writing some of the catchiest songs you will hear this year. As a kid, growing up in Scarborough, a suburb of Toronto, Nue used to rap on tracks for his older brother, Sauceboy, when he was getting into beat-making. He is still Nue’s consistent collaborator with tracks on Playground. Nue’s first couple of singles in 2017 (“Obvious” and “Alaska”) he posted on YouTube and Spotify, then released his first mixtape, Iroquois. “Nightfall” came in the spring of 2018. All the accolades and press (Google it) led to some opportunities to ghost write on some big tracks, music placements in Call of Duty, and a tour with Fetty Wap.

If you must know a bit more about this rising star, he used to draw, loves weed and tequila, and skateboarding and snowboarding. Anything more personal, you can learn from his songs, emotion-based from personal relationships and experiences.