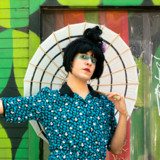 The band that “saved summer” (ABC News) was born in 2015 when lead singer, Claudi, moved from Puerto Rico to NYC to fulfill her dream of playing in the subway. They quickly gained a following, including Paul Banks (of Interpol) who called one of her performances “Absolutely epic. This music turned my soul.” Through the literal underground, Claudi met the musicians and artists that would turn Pinc Louds into the full-blown spectacle they are today. Their passionate shows with wild theatrics

have been packing NYC venues such as