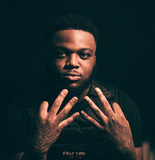 Hailing from Kennington, South London, 20 year old Joshua, is better known to his fans as Blanco. The young drill rapper is making his much awaited return to the UK music scene, after a short hiatus. As a key member of Harlem Spartans - one of the most well known drill groups in the UK - Blanco has already made his mark on the UK drill scene, along with the group. With tracks like ‘Blanco Bourne,’ ‘Call Me a Spartan’ and ‘Kennington Where It Started’ under his belt, the rapper has amassed a huge following both as a solo artist and with Harlem Spartans.