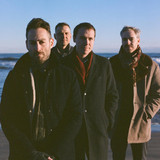 American Football made an EP and a self-titled album in the late '90s that didn't garner tons of attention at the time of their releases, but in the years that followed, the sparse and emotional sound the trio created became an influential emo touchstone. Their stature grew, and when they reunited in 2014 for a handful of shows, the outpouring of love and support they received spurred them to make the reunion a more permanent venture. The group's new albums in the second half of the 2010s captured the spirit of their earlier work but added the gravitas of time passed, as well as a new sense of sonic experimentation on 2019's LP3.

The band formed while the members -- vocalist/bassist/guitarist Mike Kinsella, guitarist Steve Holmes, and drummer/trumpet player Steve Lamos -- were students at the University of Illinois in 1997. Kinsella had already played drums in the frantic emocore group Cap'n Jazz and the darker, more melodic post-rock band Joan of Arc; he and Lamos were also members of the One Up Downstairs. When that band split, Lamos and Holmes started playing together. They brought in Kinsella and began working on crafting songs and a sound. The trio spent almost a year coming up with a clean, melodic approach that blended the intimacy of emo with the empty space of jazz, while adding pop hooks and jangling guitar interplay to the mix. They recorded a three-song self-titled EP in 1998, which Polyvinyl released in October. The trio played some shows around the Midwest and then began work on a full-length album with producer Brendan Gamble. The group worked quickly getting the songs -- some of which were half-written -- finished and down on tape. Unlike the first EP, which had no bass, Kinsella played the instrument on a few tracks, Holmes added keyboards, and Lamos some trumpet. The album was completed in four days, just after the school year ended, and two thirds of the band moved back home. American Football was released by Polyvinyl in September 1999. The trio got back together for a few shows, including a swing through NYC, but decided to go their separate ways not longer after that. While the other two drifted away from music, Kinsella went on to perform solo as Owen, drum with Joan of Arc, form the group Their / They're / There, and play with his brother Tim in Owls. In the meantime, the legacy of American Football grew as new legions of emo fans discovered their music. Polyvinyl issued their debut LP on vinyl in 2004, and it racked up large streaming numbers once that became a source of discovering new/old music. The band didn't capitalize on their influence and importance by reuniting, but in 2014 they did work with Polyvinyl on an expanded reissue of the record that added a second disc of demos and rarities. The day the record was announced, the response crashed the label's website, and when the band announced a series of reunion shows, tickets sold out immediately. They expanded the tour to go around the world, and the experience went so well that the band (who became a foursome with the addition of Mike's brother Nate on bass) decided to make an album. Working with producer Jason Cupp, American Football recaptured the sound of their first album and added the life experience of the almost two decades between records. Titled American Football (LP2) and released by Polyvinyl in October 2016, the band headed out again on another worldwide tour. Once home, they began trading song ideas and demos over the wires. The sound that emerged from their long-distance collaboration and then in the studio was something new for the band. More expansive and dream-like, with melodies that unfolded over longer durations, the songs featured arrangements that added pianos, vibraphone, and a children's choir along with vocal contributions from Paramore's Hayley Williams, Land of Talk's Elizabeth Powell, and Rachel Goswell of Slowdive. American Football [LP3] was issued by Polyvinyl (and Big Scary Monsters in the U.K.) in March 2019. ~ Tim Sendra, Rovi