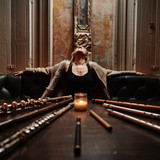 Eliza is a flautist who enjoys a diverse career of music from all corners of the globe. A lover of travel, she has toured with Peter Gabriel throughout Europe, North and South America, and all over India with sarod guru Amjad Ali Khan/Britten Sinfonia. She founded folk band ‘Ranagri’, recording five highly acclaimed albums with Stockfisch and Wrasse Records, and performing at Cambridge Folk Festival, Birmingham Symphony Hall, The Union Chapel, and The Terry Wogan Show. Featuring her unique Indian bansuri playing, she appeared for the World Première of Joby Talbot's ballet ‘The Winter's Tale’, as onstage soloist at The Royal Opera House accompanied by Orchestra of Covent Garden, followed by performances with The Queensland Symphony Orchestra, Brisbane. It received 5* reviews from the telegraph and all major critics. Eliza can be heard on numerous film scores and albums, including for Ridley Scott and Peter Jackson, on Lord Of The Rings, Prometheus, The Great Gatsby, with Paul McCartney, The Who and Stevie Wonder, at Abbey Road and Air Studios, or on 18 flutes for The Lion King in London. Eliza believes strongly in the binding qualities that cross-cultural music-making offers. Trips to Africa and Scotland are an important part of Eliza’s musical passions, also fulfilling her love for wilderness. This has inspired her latest project ‘Freedom To Roam’, launching at Cecil Sharp House in December 2021.