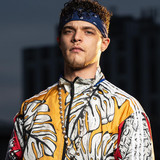 Splinta is a music artist hailing from Nottingham City, being a artist known for his unique storytelling style of music gaining millions of Youtube views on platforms such as JDZmedia for his Storytellers then hitting with his next hit's such as Bad Boy, Negativity & Fortnite which was supported by channels such as SBTV & GRM Daily reaching millions of views and new followers.... Gaining more and more of a fanbase Splinta became a influencer for people to look up to when they are feeling low and suffering with Mental Health problems which he gains messages daily on all social media platforms. Being one of a very few selection of people coming from Nottingham having multiple videos on Youtube with over millions of views he is on the rise to the top.