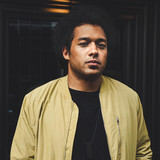 Makaya McCraven is a beat scientist. The cutting-edge drummer, producer and sonic collagist is a multi-talented force whose inventive creative process & intuitive style of performance defy categorization. His breakthrough album as a lead artist, In the Moment, was released via fledgling Chicago label International Anthem in January of 2015. The dramatic double LP statement was also McCraven’s coming-out as a producer, where he debuted his unique brand of “organic beat music” – defined by his process of recording live, fully improvised, exploratory ensemble performances, then editing & post-composing the recordings into concise & catchy song forms. McCraven went on to release his first DJ-style mixtape Highly Rare in 2017, produced from a single live performance in Chicago. That same year, he began production on a second mixtape titled Where We Come From (CHICAGOxLONDON Mixtape) made from live recordings – this time captured in London, where he improvised with an all-star cast of cats from the city’s bubbling jazz scene. In October 2018, McCraven delivered the epic double LP Universal Beings, featuring his signature post-production rub of live improvised recordings from 4 sessions in New York, Chicago, London and Los Angeles, showcasing an A-list roster of emergent players from each of those creative hotbeds.