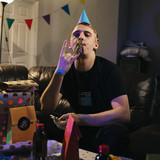 At 23 years old, Sylla hasn’t been in the game long, but his mark on the scene cannot go unnoticed. Within just months of dropping his first debut project ‘Ignored’ Sylla B was nominated for GRM Daily’s Rated award. Rubbing shoulders with some of the UK’s biggest musicians has helped this young prodigy develop a work rate and drive that not many could rival. Drawing influences from both Grime and Hip-Hop, his rapid-fire flow, lyrical dexterity and ferocious delivery help to create a performance style that is truly astounding. Sylla has a strong following in Bristol, and this reach has began to spread around the UK.