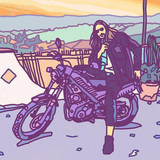 Cape Lion (Carl-Johan “Oa” Sevedag) is a Swedish born, Stockholm based songwriter/producer. Cape Lion, initially a duo, first gained recognition in 2015 through their critically acclaimed single “Called You Mine,” which led Interview Magazine to proclaim them as “the latest in a long line of Stockholm-bred pop genius.” They went on to release their debut EP ‘Corinth’ and a slew of singles like 2016’s “Mulholland Drive” (which has racked up over a million streams on Spotify alone), along with projects expanding into film, showcasing their musical prowess across the arts. Since becoming a solo act in 2017, Sevedag has been focusing on composing scores for movies such as Borg vs. McEnroe and the upcoming Horizon Line.