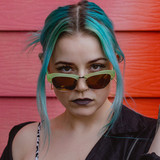 Divine Comedy has certainly been a humbling revelation for Chersea. From the cold introspective beginnings that characterized her debut “Grey Matter” with overtones spilling into her sophomore album “In Limbo”; Divine Comedy provides a new perspective of the person Chersea has become. Utilizing isolation and the feelings of navigating difficult relationships and healing from unrequited love, Chersea’s discourse has changed. It’s become dialogue and less of a poetic introspection. It’s important that this time you can hear the love in the sentiments in the form of her comedic “divine”; where she expresses humility and the honesty of recognizing or misidentifying deception contributing to her faults. She recognizes, however, that she doesn’t need everyone to like her, that she makes people uncomfortable, and that no matter what mess she tries to fix it can result in a bigger disaster. That is her Divine Comedy. Reaching a place of inner peace that ebbs between disdain and respect that is directly influenced by the interactions of others. This perpetual cycle precedes her own existential crisis illuminated by the requirement of needing things others can’t provide. By pointing out her own failures through a series of dialogue she exposes the truth behind paradise: that it could just all be a joke after all, and that this joke could be the most defining measure of being human. Chersea's new album, Divine Comedy, is scheduled for release on June 25th, 2021.