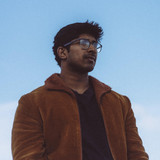 24-year-old singer-songwriter Soham De is hard to pin down. On the one hand, he’s one of the UK’s most distinctive singer-songwriters. A man whose sprawling compositions and immediate, gravel-tinged vocals – think Dermot Kennedy and Hozier crossed with a hint of Hayley Williams – betray a penchant for bombast and ambition that stretches far beyond his tender years.

On the other, he’s an introvert who feels most at home on the road. A New Delhi-born, King’s Lynn-raised creative who feels equally as comfortable performing to thousands on a sprawling festival stage as he does to a hundred people in a packed-out backstreet bar. A prodigiously talented singer-songwriter, and man of the road, whose sole goal is to share his intricate, anthemic songs with as many people as possible. His debut single, ‘Brave’, was released in 2018, and he soon garnered support from BBC Introducing, Sofar Sounds, the Never Fade Sessions, and SBTV. Slots at WOMAD, Pinkpop, The Great Escape, Boardmasters, and Live at Leeds festivals followed, as well as a European tour with The Pierce Brothers and select headline shows across the UK and Europe. In 2020, fans were given a sneak peek of new material in the form of Soham’s sparse, vulnerable, and home-recorded Quiet People and About Happier Things EPs. By now a touring veteran, this pair of live recordings capture Soham at his most brutally vulnerable without losing any of the raw, visceral magic of his previous studio recordings.