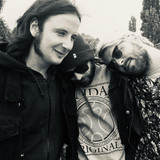 Mandrax Queen came into existence as a trio in late 2012 after their former singer had left the band, which had been keeping itself busy writing and recording Blues-infused Stoner Rock tunes in a rural shed in Southern Germany until then. Left with the question where their musical journey should lead to from there, the band found its new sound in just one defining jam session on a grey November night: a mashup of heavy Stoner Rock and catchy Funk guitars combined with a 90s Alternative Rock feel. The band released four EPs between 2013 and 2016 and played way more than a hundred shows in Germany and the Czech Republic – always focused on pushing their Stoner-Funk into new realms of songwriting. In 2017 the band took a break from playing live to work on their first full-length album “Homeboy”, which came out in 2019 and turned out to be a Wave-fueled 80s Rock record packed with hooky vocal lines. The honesty of lyrical and musical expression in songs like “All Together Now” and “Superman Again” perfectly represents the album as a whole.