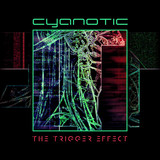 part band, part machine, the Chicago-based angry robot outfit Cyanotic, has been producing their own hybrid of angry robot music since forming in 2002. Striking balance between synthetic order and frenzied chaos, the band's 2017 release "Tech Noir" serves as a welcome updating of their loving homage to electronic music culture and classic cyberpunk tropes, and a nod to the nightclub featured in The Terminator (1984). The new Cyanotic live show is nothing short of a digitized onslaught of old and new school, with visual media and a cybernetic stage structure. Cyanotic is planning a North American tour to coincide with the release of the "Tech Noir" companion album "RETECH" which is scheduled to be released in summer of 2018.