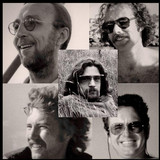 Formed in France in 1970, King Harvest included Eddie Tuleja (guitar), Ron Altbach (keys), Rod Novak (bass, sax) and Wells Kelly (drums). After winning a French rock contest, the band added bassist Didier Alexandre and recorded their first album. The group was asked to score the soundtrack to Le Feu Sacre which represented France at the Cannes Film Festival in 1971 where they performed nightly at the Juan-les-Pins Whiskey-a-Go-Go. Joined by Doc Robinson (keys, vocals) they were booked to open for BB King at the Olympia Theatre in Paris and headline at the Speakeasy in London. In 1972 King Harvest teamed up with producers Pierre Jaubert and Jack Robinson to record Dancing in the Moonlight, written by their old friend Sherman Kelly.

Released in the U.S., Dancing in the Moonlight became a hit and stayed high on the Billboard charts for 22 weeks. King Harvest dissolved in 1976 to work with The Beach Boys, touring in the US, Canada, Australia, New Zealand, England, and recording on Beach Boys, Celebration, and Dennis Wilson albums.