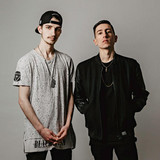 Young Saints are two Spanish djs and producers from Spain. While they started to get interested in the mashups, their firsts mashups got support from Victor Niglio, Wolfpack and Djs From Mars, after that, they started producing, their first track got feedback from System of Loudness, one of the references of hardstyle in Spain; Later, they released tracks on Groove Street (label of Beauty Brain), Natas Records (label of Dj Nano). They released his tracks Cuantas Veces and Bounce, and their collaboration with Black Mamba, "Mamabicho", was released on Clipper's Sounds. The quality of their productions drew the attention of The Zombie Kids (MTV EMA 2012 "Best Spanish Act“ award recipients) , one of Spanish top Producer/Dj combinations in the electronic music industry in Spain, so they were selected to be in the remix pack production of their hit track Black Zombie. After this huge accomplishment in their career, they continued to produce top quality productions on the Clipper’s Sounds label like their

track “Turn Up Roll Up“.In the start of this year (2020) they remix of Black Zombie was nominated in the AMAS Prizes, the largest