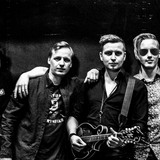 Felgen Orkester came together as a band in late 2011 when Petter Tretnes Hansen and Nils Mikael Hætta Hansen met at a local bar in Karasjok owned by Morten Ailo Hansen. The band was fully completed with drummer Johan Biti, guitarist Henning Anti and basshunter Tom Stian Tretnes. The last member of the group, the swedish accordion player Rolf Amundsen, joined the band as a "prick over the i". Fun fact:

all the band members are cousins, that includes 2 pairs of Brothers. The band have gone to become one of the most playing saami bands, with their Joik'n'roll music and pyro effects. In 2013 we released the bands first EP "Soajat", followed by album "Skealbma Mojit" in 2015 and their second album "Duhat Jagi Geahcen" in 2017. In 2019 we released album "Mirko Calmmit". In 2020 "Cudit" came to life!