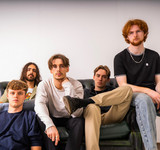 A 5 piece perspective of the world. Personifying the madness, unity and heartache of the city they made their name in, Bedside Manners provide an outlet and identity to their followers. With anthemic choruses moulded on top of chaotic, rowdy guitar riffs, Bedside Manners create a high energy blend of indie punk and alternative rock that the band call ‘Filthy Indie’.   Their latest singles, ‘What It Seems’, ‘Out Of Control’, ‘Feel Alive’ and ‘Hold Your Stare’, recorded with Al Groves (producer of Bring Me The Horizon's 'That's The Spirit') have been supported by BBC Radio 1, BBC 6 Music with Steve Lamacq, Radio X with John Kennedy, BBC Introducing Liverpool & Lancashire, BBC Radio Merseyside and SIRIUSXM. These songs have also been listed in Spotify’s editorial playlists ‘All New Rock’, ‘Hot New Bands’, ‘New Punk Tracks’, and ‘The Punk List’.   Following the momentum of these singles, Bedside Manners sold out their headline show at Liverpool’s o2 Academy and signed with Marshall’s Live Agency.  Their mantra ‘My People Matter’ is a message aimed to unite everyone under the banner of Bedside Manners’ brand of Filthy Indie antics, creating a connection between the music and the fans. Bedside Manners’ listeners are a part of the band. Anyone who has seen the band live can experience the overwhelming connection the band have with their fans.   For a band still in their infancy, Bedside Manners are looking to take the world by storm.