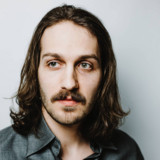 Cullah (Born Ian McCullough on April 27, 1991 in Milwaukee, WI) is a multi-disciplinary musician and engineer who releases an album every year on April 27th since 2006. Each album reflects the eclectic musical styles that Cullah draws from – Cullah is a walking autobiographical journey of musical expression. With each revolution around the sun, Cullah explores and documents his human condition through various stories and song. Cullah finds his inspiration from in many places – you may find yourself moving from folk to electro house somehow seamlessly. Driven by a belief in larger cosmic order, he is clearly motivated by a spiritual nature rooted in the internet revolution and democratization of sound. He releases all his music royalty-free Creative Commons Attribution license and each open-source. Cullah was born to the daughter of an Austrian gypsy-poet and the son of an Irish codebreaker. His mother was one of seventeen children in the Wolff Family Band and was classically trained in jazz music. His father is a mathematician and computer scientist raised on a Missouri farm, entranced with the Earth and the limits of the cosmos.